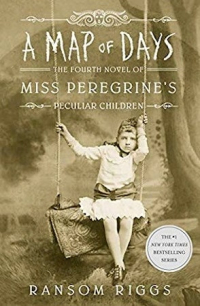 AÑADELO A TUS LIBROS FAVORITOS
Con esta compra obtienes 50 páginas MundoCervantes
t's finally here! The much anticipated fourth instalment in the bestselling Miss Peregrine's Peculiar Children series
Having defeated the monstrous threat that nearly destroyed the peculiar world, Jacob Portman is back where his story began, in Florida.
Except now Miss Peregrine, Emma, and their peculiar friends are with him, doing their best to blend in with the help of 'normalling' lessons.
But carefree days of beach visits are soon interrupted by a discovery - a subterranean bunker that belonged to Jacob's grandfather, Abe.
When clues to Abe's double-life as a peculiar operative start to emerge, along with secrets hidden in plain sight, Jacob begins to learn more about the dangerous legacy he's inherited, and the truths that were part of him long before he walked into Miss Peregrine's time loop.
Now, the stakes are higher than ever as Jacob and his friends are thrust into the untamed landscape of American peculiardom - a world with few ymbrynes, or rules - that none of them understand.