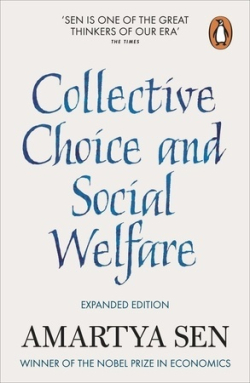 Nobel Prize winner Amartya Sen's first great book, now reissued in a fully revised and expanded second edition
'Can the values which individual members of society attach to different alternatives be aggregated into values for society as a whole, in a way that is both fair and theoretically sound? Is the majority principle a workable rule for making decisions? How should income inequality be measured? When and how can we compare the distribution of welfare in different societies?'

These questions, from the citation by the Swedish Academy of Sciences when Amartya Sen was awarded the Nobel Memorial Prize in Economics, refer to his work in Collective Choice and Social Welfare, the most important of all his early books. Originally published in 1970, this classic work in welfare economics has been recognized for its ground-breaking role in integrating economics and ethics, and for its influence in opening up new areas of research in social choice, including aggregative assessment. It has also had a large influence on international organizations, including the United Nations, particularly in its work on human development. In its original version, the book showed that the 'impossibility theorems' in social choice theory-led by the pioneering work of Kenneth Arrow-need not be seen as destructive of the possibility of reasoned and democratic social choice.

Sen's ideas about social choice, welfare economics, inequality, poverty and human rights have continued to evolve since the book's first appearance. This expanded edition, which begins by reproducing the 1970 edition in its entirety, goes on to present eleven new chapters of new arguments and results. As in the original version, the new chapters alternate between non-mathematical chapters completely accessible to all, and those which present mathematical arguments and proofs. The reader who prefers to shun mathematics can follow all the non-mathematical chapters on their own, to receive a full, informal und...
100% Pago seguro | 3 a 5 días
Con esta compra obtienes 50 páginas MundoCervantes