Colour of milk, The 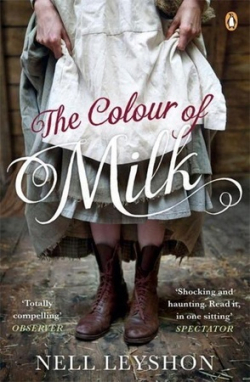 CLICK&COLLECT
The Colour of Milk is the new novel by Orange longlisted author and playwright Nell Leyshon.

The year is eighteen hundred and thirty one when fifteen-year-old Mary begins the difficult task of telling her story. A scrap of a thing with a sharp tongue and hair the colour of milk, Mary leads a harsh life working on her father's farm alongside her three sisters. In the summer she is sent to work for the local vicar's invalid wife, where the reasons why she must record the truth of what happens to her - and the need to record it so urgently - are gradually revealed.

'I loved it. The Colour of Milk is charming, Bronte-esque, compelling, special and hard to forget. I loved Mary's voice - so inspiring and likeable. Such a hopeful book' Marian Keyes

Nell Leyshon's first novel, Black Dirt, was longlisted for the Orange Prize, and shortlisted for the Commonwealth prize. Her plays include Comfort me with Apples, which won an Evening Standard Award, and Bedlam, which was the first play written by a woman for Shakespeare's Globe. She writes for BBC Radio 3 and 4, and won the Richard Imison Award for her first radio play. Nell was born in Glastonbury and lives in Dorset.

Shocking and haunting. Read it, in one sitting Spectator