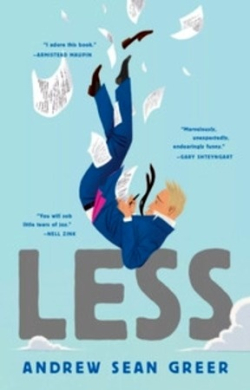 CLICK&COLLECT
Less (Abacus; $19.99), the novel that won this years Pulitzer Prize for fiction, is the story of Arthur Less and his quest for love. Pulitzer, by the way, is pronounced Pull-it-sir not Pew-lit-sir, one of the many facts to be learnt from this fiction. Theres also a neat riff about a lovely man, a long-ago lover of Arthur Less, who was astonished and thrilled to win the Pulitzer Prize for poetry. The Pulitzer is spoken of with such sweet, sly adoration that the judges couldnt have awarded it to anyone else.
It is deserved. Andrew Sean Greer, with five other novels behind him, has conjured both popular and literary success in a similar way to Anne Tyler. They share a captivating faux artlessness that is in fact immense sophistication, the fruit of a profound understanding of, and education about, the human condition. In its wit, comedy, ease and depth of feeling, Less matches Tom Rachmans The Italian Teacher. Do these novels signal an emerging genre? Of endearing and evolved male characters who are unfailingly courteous, terrified they are boring others when they speak, and unselfishly interested in everything about other people? Amen.
Less is about to turn 50. He still looks young but frets about possibly being the only gay man in history to grow old, and he enjoys real success as a writer, despite believing that he is mediocre and will never achieve a Pull-it-sir Prize. (Yes, it is also a very successful smutty joke.) Lesss publisher has just rejected his latest novel (too sad) but what is most unbearable in his life is an invitation to the marriage of Freddy, his recent lover of nine years. Their break-up was affable but sorrowful. Less could not believe that a man 14 years younger could really want to love him forever, and ignored all the signs that Freddy did indeed want exactly this. Freddy would certainly have settled for Less.
So Less decides to clear out of California for the months before, during and after the wedding. To do th...
100% Pago seguro | 3 a 5 días
Con esta compra obtienes 20 páginas MundoCervantes