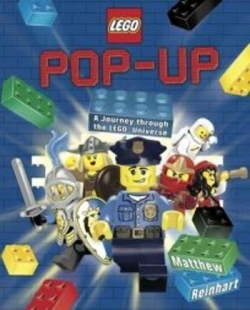 Reinharts characteristically spectacular paper engineering serves as backdrop to a brisk tour of Lego history, as recounted by a minifigure expert, Professor von Brickhausen. Over five spreads, the narrative covers the bricks Danish origins; the advent and variety of minifigures; urban, medieval, and galactic worlds within the Lego universe; the popular Lego Ninjago line; and the creative potential of the bricks themselves. While the text can be baldly promotional (When different Lego themes, minifigures, and elements come together, the possibilities are endless), Reinharts interactive embellishments are as delightful as they are intricate and well executed. The opening spread features an impressive three-in-one pop-up that sees a Lego race car transform into an aircraft and then a dinosaur by pulling tabs, and readers can mix and match minifigure heads, torsos, and legs by turning three dials in a later spread. Lego devotees will be in heaven. Ages 710. (Sept.)
100% Pago seguro | 3 a 5 días
Con esta compra obtienes 120 páginas MundoCervantes