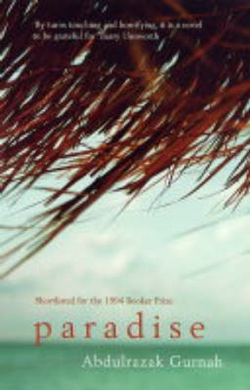 CLICK&COLLECT
Gurnah's powerful, ironically titled story evokes the Edenic natural beauty of a continent on the verge of full-scale imperialist takeover by the European powers. Set in Colonial East Africa as English invaders drive natives off the land and Germans plan a railway across the continent, the novel focuses on Yusuf, a teenager sold by his father into indentured servitude at age 12 to pay off a debt. Working in the shop of his exploitive Uncle Aziz, then trekking with a trade caravan, callow Yusuf learns the ways of the world as he encounters an Africa rife with tribal warfare, superstition, disease and child slavery. He also falls hopelessly in love with Amina, the adoptive sister of a fellow indentured worker; she was married off, against her will, to the much older Aziz, who, we learn, may not be Yusuf's real uncle. Born in Zanzibar and currently a professor of literature in England, Gurnah ( Memory of Departure ) conjures a cauldron of animosities among African Muslims, Indian merchants, European farmers and native tribes in a vibrant coming-of-age story.
100% Pago seguro | 3 a 5 días
Con esta compra obtienes 50 páginas MundoCervantes