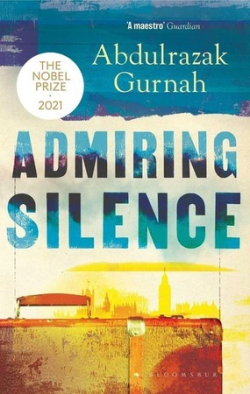 A "corrosively funny and relentless" (The New York Times) tale of cultural identity and displacement, Admiring Silence is the story of a man's dual lives as a refugee from his native Zanzibar in England.

The unnamed narrator of this dazzling novel escapes from Zanzibar to England knowing that he will probably never return. In his new country, things are not quite as he imagined - the school where he teaches is cramped and violent, and he quickly forgets how it feels to belong.

But when he meets a beautiful, rebellious woman named Emma, and when Emma, turns away from her white, middle-class roots to offer him love and bear him a child, the narrator chooses to hide his past from his new family and his present circumstance from his family back in Zanzibar.

Twenty years later, when the barriers at last come down in Zanzibar, he is compelled to go back. What he discovers there, in a story potent with truth, will change the entire vision of his life.

I don't think I've ever read a novel that is so convincingly and hauntingly sad about the loss of home, the impossible longing to belong Michèle Roberts Independent on Sunday
100% Pago seguro | 3 a 5 días
Con esta compra obtienes 20 páginas MundoCervantes