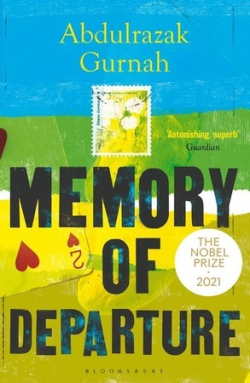 Hassan Omar is a gifted young man, with a potentially bright future but a past marred by poverty. In the wake of a national uprising, and with a new government in place, though, he is denied a scholarship to a university abroad and deprived of the opportunity to study further. Instead, Hassan travels to Nairobi to stay with a wealthy uncle, in the hope that he will release his mother's rightful share of the family inheritance.

In Nairobi, Hassan experiences the collision of past secrets and future hopes, and the compounding of fear and frustration, beauty and brutality. In his debut novel, Nobel Prize winning author Abdurlazak Gurnah creates a fierce tale of undeniable power.

A captivating storyteller, with a voice both lyrical and mordant, and an oeuvre haunted by memory and loss. His intricate novels of arrival and departure . reveal, with flashes of acerbic humour, the lingering ties that bind continents, and how competing versions of history collide Guardian
100% Pago seguro | 3 a 5 días
Con esta compra obtienes 20 páginas MundoCervantes