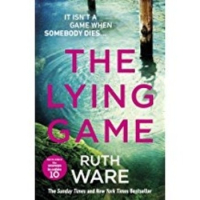 AÑADELO A TUS LIBROS FAVORITOS
Con esta compra obtienes 20 páginas MundoCervantes
'To read [The Lying Game] is to have your nerves slowly but inexorably shredded as, over and again, the tension builds and then evaporates until the final, unexpected denouement' Metro

'A gripping, unpredictable narrative that shifts like sand underfoot, and a plot that turns like the tide.' ERIN KELLY bestselling author of HE SAID SHE SAID

'Thank goodness for Ruth Ware...[The Lying Game is] gripping enough to be devoured in a single sitting' Independent

Four friends. One promise. But someone isn't telling the truth. The twisting new mystery from bestselling phenomenon Ruth Ware.


The text message arrives in the small hours of the night. Its just three words: I need you.
Isa drops everything, takes her baby daughter and heads straight to Salten. She spent the most significant days of her life at boarding school on the marshes there, days which still cast their shadow over her.

At school Isa and her three best friends used to play the Lying Game. They competed to convince people of the most outrageous stories. Now, after seventeen years of secrets, something terrible has been found on the beach. Something which will force Isa to confront her past, together with the three women she hasn't seen for years, but has never forgotten.

Theirs is no cosy reunion: Salten isn't a safe place for them, not after what they did. Its time for the women to get their story straight