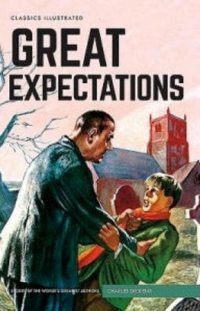 AÑADELO A TUS LIBROS FAVORITOS
Con esta compra obtienes 20 páginas MundoCervantes
Pip is a young blacksmith's apprentice, who is one day accosted by an escaped convict, who he aids by providing him with food and a file. Soon after, he is called upon by the mysterious and wealthy Miss Havisham to entertain her. He meets the beautiful but stubborn Estella at the home of Miss Havisham and develops feelings toward her. Later, Pip is sent to London and receives financial support from an unexpected benefactor...Classics Illustrated tells this wonderful tale in colorful comic strip form, offering an excellent introduction for younger readers. This edition also includes a timeline of technological progress in Dickens's lifetime and study questions, which can be used both in the classroom and at home to further engage the reader in the story.The Classics Illustrated comic book series began in 1941 with its first issue, Alexandre Dumas' "The Three Musketeers", and has since included over 200 classic tales released around the world. This new CCS Books edition is specifically tailored to engage and educate young readers with some of the greatest works ever written, while still thrilling older readers who have loving memories of this series of old.