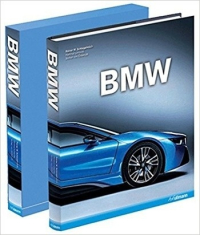 AÑADELO A TUS LIBROS FAVORITOS
Con esta compra obtienes 50 páginas MundoCervantes
"For 100 years, BMW's blue and white propeller logo has been associated with top-technology, sophisticated design, comfort and reliability. BMW cars give you wings, not so surprisingly, as the company was established in March 1916 as an aircraft engine manufacturer. Its reputation of constant innovation and timeless elegance has conquered generations of drivers around the globe. In this jubilee edition, car photographer Rainer W. Schlegelmich pays tribute to the tradition of excellency that made BMW's brand stand out among the world's great carmakers. All car models, presented in chronological order, are beautifully photographed and described, from the early and legendary models such as the pre-war 328, the 507 from the 1950s, or the M1 of the 1970s through to the brand-new releases and prototypes. This book invites for a fascinating tour of BMW's unique car style. It will ravish car collectors and BMW fans alike. Includes the following new models: BMW i3 ( I01 ) BMW i8 ( I12 ) BMW 2 Active Tourer ( F45 ) BMW 3 GT ( F34 ) BMW 4 Gran Coupe ( F36 ) BMW X4 ( F26 ) BMW X5M ( F85 ) BMW X6M ( F86 ) "